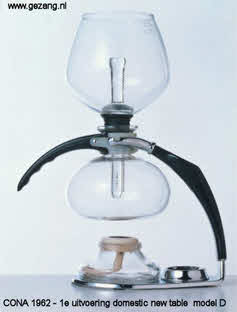 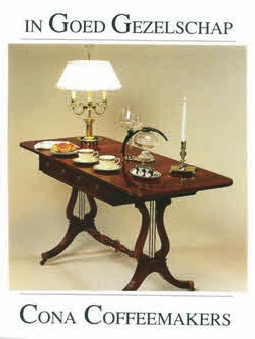 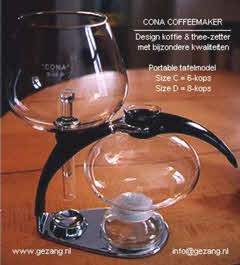 The popular British poster designer Abram Games shortly after the second world war came to meet a director of the Cona Coffee Machine Company. He argued, that the design of his basic Cona device could be improved, notwithstanding the delicious coffee that he made with it every day.

His model  "De Luxe" possessed all the features necessary to prepare a perfect cup of coffee - Cona Coffee - but lacked ergonomic ingenuity.

The graphic designer Abram Games took a fresh look at it from the creative perpective of an artist. He was well acquainted with modern insights into ergonomics, had practical knowledge of modern materials, and took a keen interest in the latest manufacturing techniques.

In 1947 Games presented his first sketch in the Cona factory in Wimbledon (near London, England). This set the course for a complete re-design of what was to become our famous Cona Table Model coffeemaker.

Abram Games had asked himself important questions in search of a better design, and found creative answers, which have become quality features of every Cona produced since then.

Games was a practical thinker. He created art, that was faithful to his motto "Maximum Meaning, Minimum Means". He used powerful symbolism to achieve this, as an image so often can tell you more than a 1,000 words .

Precisely for this talent, the British government had employed him during the war to successfully bring important messages across to the civilian population. Posters, that explained how every person could help the war-effort. His images on billboards told them to re-use scarce resources, to help feed yourself by growing your own food (see picture next to this), and telling soldiers simply to ‘Keep your feet clean, you owe it to yourself, your comrades, your efficiency’.

Accomplished and talented with pencil and paint, the artist Games had a very pragmatic approach to what deserved to carry his signature. He tested the quality of his work, long before he finished it, by seeking the honest opinion of friends and family on a work-in-progress. A lukewarm response, meant it was likely to end in the trash can. Only after he signed it, it would become part of his body of work.

The normal glass used for pre-war glass coffeemakers was fragile. Shortly after the war ‘flame- proof ‘(also called 'Pyrex') glass was developed, and came onto the market in the early 1950’s. It offered an extraordinary resistance to temperature fluctuations.

Of course, Games and the Cona factory chose this ideal new type of laboratory quality glass, and combined it with a clever new design for the upper funnel and lower bowl. They realized, that temperature fluctuations cause material to expand when it heats up and shrink once it cools down again. Thin shapes - by nature - can withstand such expansion and shrinkage better than thick glass. Thin glass also helps the transfer of heat better, as in comparison to e.g. metal objects glass is a bad conductor.

Thick-walled glass however would stand a better chance to take a hit from physical impact without breaking. These two objectives seemed at odds with each other. Games found a solution by combining two of nature’s strong yet thin shapes: a ball and an egg. This explains in part the shape of the bowl and funnel. The Cona bowl is flat underneath to help the flame spread, and keeps it standing upright instead of rolling on its side when placed onto a table or your kitchen surface.

The Cona Rex was his first Cona re-design. It was taken into production in 1953. The shape features many characteristics of the early 1950s. To make our case, just compare it with the Porsche convertible 1950’s actor James Dean crashed in, or with the Jaguar Mark II many of us associate with the BBC TV-series ‘Inspector Morse’ or ‘Endeavour’. These then fashionable drop shapes were obtained by sheet metal processing techniques such as ‘rolling’ and ‘forcing’. Shapes that first evolved in supersonic fighter planes. The wider public came to embrace its aerodynamic shape and ditto styling, whilst in the military the propellor-driven Spitfire fighter was being replaced. From the scrapped thin aluminum plating of war planes such as the Spitfire, the first prototype versions of the Cona Rex were made.

After the Rex model had been taken into production, the droplet form was found to be too expensive for optimal mass production. Games recognized a conflict with his own motto, prompting him to re-design the Cona in 1959. He then gave the stand and handle its present form. Since 1962 it has been continiously manufactured upto the present day.

Both the Cona Rex and the Cona New Table Model are now part of the permanent collection of the British Science Museum.

During his lifetime Abram Games received recognition and was honoured for his achievements. He was awarded the title "Royal Designer for Industry" (RDI) and the "Order of the British Empire".  If you want to go an see an exhibition of his work, then please click on this link to see his website.

Now let us take a closer look at some specific parts.

This unique sieve system makes the Cona the only

"all-glass" coffee maker, with the liquid coming in contact with glass only. This means: No transfer of taste from one brew to the next.

With other lesser brands a plastic fluted dish, often needing a (disposable) cloth or filter paper, acts as the separator. This dish is held in position by a steel spring hooked on the bottom of the spout. An unnecessary compromise.

The patented Cona ‘All-Glass’ filter design is far more ingenious. It is entirely made of glass and looks like a fishing bob. This has a cone shape in the middle with a particular surface reliëf, that resembles the skin of an orange. On its own weight it rests in the funnel spout. This creates a remarkably perfect filter without any use of filter paper or cloth to help it perform. Because glass does not pick up any taste, you can brew tea or another extract in your Cona as well as coffee. You just have to clean it in between cycles.

2) The arched stand. The Cona stand is made out of solid cast metal parts. The chrome plated base provides a sturdy footprint. From there it runs up gracefully with the black bow shaped stem and ends with a solid cast chrome plated fork. The black stem provides an aperture to place the funnel into after the coffee has been brewed. This opening is a very useful facility because making Cona coffee is a sight to look at at the dinner table with your guests.

3) The handle grip. The handle of the Cona is not, like other brands, made of common plastic but of durable solid bakelite. The graceful bowed shape of the stem is continued in the bend of the handle. It provides a nice grip for both right and left-handed users

4) The flame-proof glass. The funnel bowl and solid glass filter are made of the finest quality borosilicate glass. With a little care you can pour hot boiling water into it, that you prepared in an electric kettle (or kitchen Quooker tap). This greatly reduces the time it takes.

With boiling water in the bowl and after you have ignited the spirit burner, it will take 4 minutes for the water to rise to the upper chamber of the funnel, and another 2 minutes after you extinguished the flame for the brew to return to the lower bowl.

We timed this using the original Cona all-glass filter drainer, whilst brewing 6 cups. For 8 add one minute. For 4 deduct one.

With a Cona you will always enjoy a ‘cup-of-excellence’! 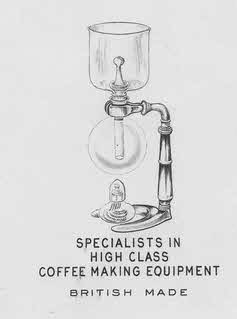 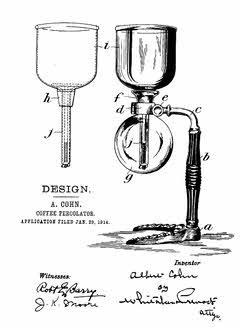 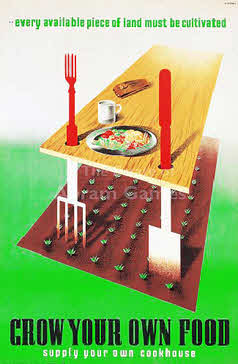 How Abram Games designed our modern design classic for the set dinner table in line with his motto, from the post-war scrap of Spitfires. 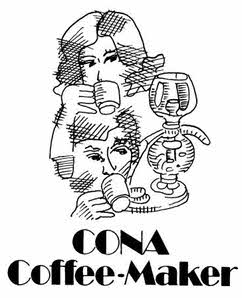 Call us, or send us an email for any enquiries 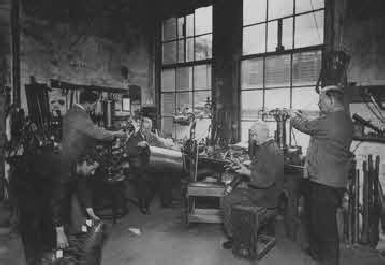 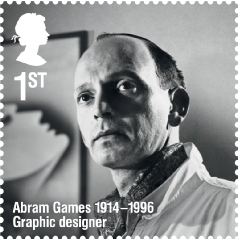 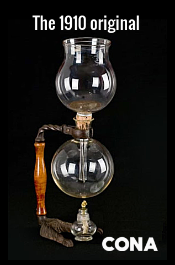